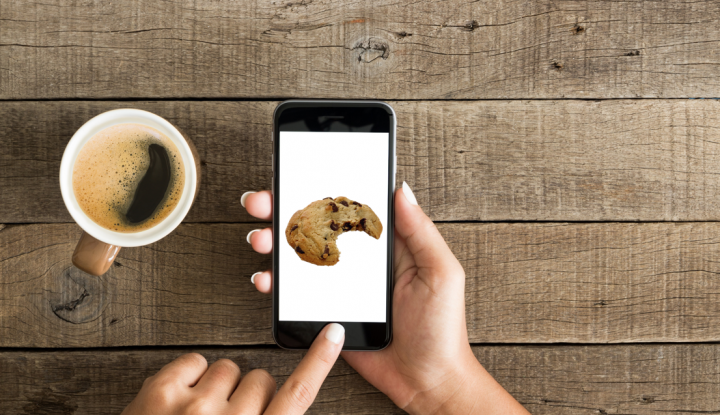 No, seriously…who? The internet’s ecosystem has evolved significantly over the past decade, but what online users are experiencing in today’s marketplace is an even more drastic shift in the battle for big data. The average person isn’t paying attention to all the ins and outs of how the internet operates but occasionally, users notice something like this:

Do you remember a time when you visited a website and didn’t get asked to accept cookies?

Fun fact: The reason these types of pop-ups are a part of our digital lives is from a European Union law that went into effect in 2018. In essence, the law states websites need to disclose that they are collecting your data upfront. Aww thanks for the heads up.

So, what exactly is a cookie? A cookie is a piece of information that labels you. The moment you enter a website you’re given your unique “code.” As you go about your commute on that website (and after you’ve left), data is collected about what you (and your code) are doing. Big brother scary stuff, right?

Cookies have been in existence since 1994 so for the better part of 27 years you’ve been living with these small blocks of data. Have you ever added something to a shopping cart, left without purchasing, came back, and that item is still in the shopping cart? Cookies. Have you ever been to a website, left, and the ad keeps following you around from that website? Cookies. They’ve always been there; they’re just now becoming more and more prevalent in the discussion around data privacy.

“Can we track you…or not?” The EU’s regulation (mentioned above) was one of the first iterations of the shift in data collection. Recently we were met with the next piece of the puzzle. On April 26, 2021 Apple released iOS update 14.5 to iPhone users. The most talked about feature of the update was that apps would need to ask users if they can track user’s data across other apps and websites. 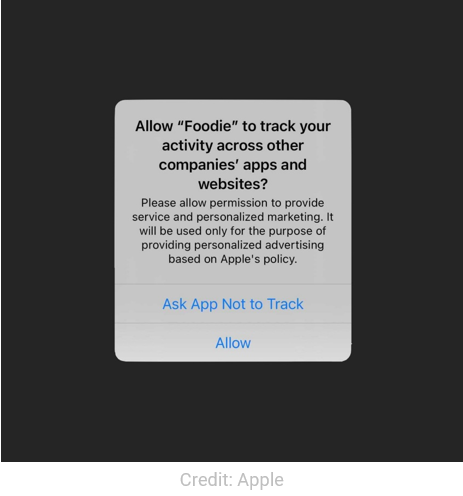 A total of 47% of the US population uses Apple iPhones as their smartphone of choice. That’s nearly 1 out of 2 people – so this change affects an audience in mass.

Now, imagine the average iPhone user: An app asks, “can we track you…or not?” Some reports have shown that 96% of users have said, ‘no thanks’ to the question since April. With this selection, the user then feels better that their data isn’t being used online unwillingly. The problem? A lot of apps and websites use data throughout a user’s digital journey to better cater ads that are relevant to them.

Enter Facebook. Most of Facebook’s revenue comes from advertising. In 2020, Facebook brought in $25 billion in advertising revenue– that’s a whopping $9 billion of their total profits. With Apple’s change, the ability for Facebook to track user activity, and to better run relevant ads, is severely diminished. Before the release, Facebook would keep track of what you’re looking at online and then deliver you a relevant ad when you’re on their app or website. Now? That’s not so easy.

Why is this happening? Apple has had their fair share of data security issues. So they might be inclined to make changes in their tracking capabilities is to help users feel protected (it’s good PR).

Online user sentiment over the past few years has shown that the average person has a sense that their information is just a data breach away. Any big company that could come in and bring power back to the people has a chance to be viewed in a positive light. A more sinister reason: Apple may be finding a way to tap into Google and Facebook’s advertising revenue. Remember how nearly 1 out of 2 Americans has an iPhone? Apple inherently has an audience at their own fingertips. They’re using the device (iPhone) and the internet browser on it (Safari). Apple has shown interest in creating their own ad network where they control the ads shown to users while accepting the revenue from advertisers – not the other big tech players. Suddenly, Apple has a way towards entering the ad game.

Not to be outdone, Google has announced that in 2023 (originally 2022) they will be eliminating third-party cookies from being able to collect user data. This eliminates a lot of digital media companies from collecting data while still allowing Google to receive first party data. Interesting fact: Safari and Firefox eliminated third-party cookies (by default) awhile back. This has just become a bigger issue now because Google’s Chrome browser allows third-party cookies and is used by nearly 2/3 of internet browser’s worldwide. 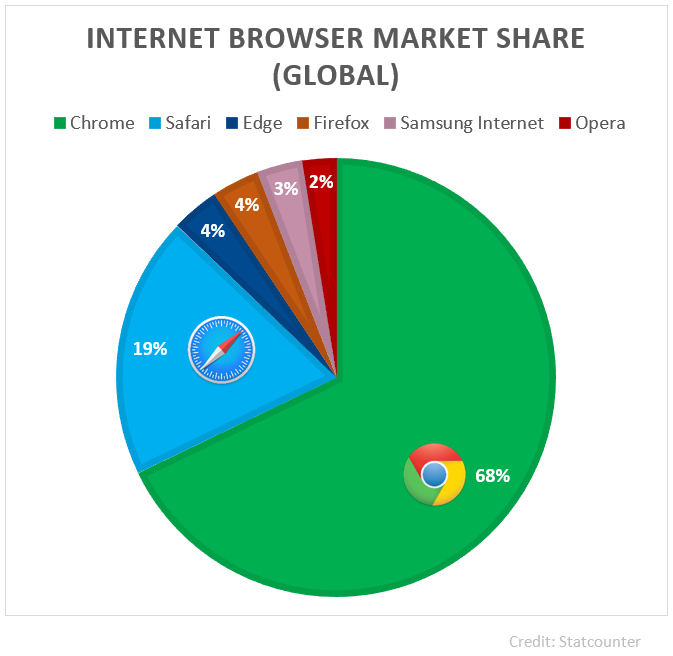 So Google, Facebook, and Apple (among others) are all duking it out over whose data can and can’t be shared. What does this mean for a hotel looking to use digital marketing to drive direct bookings?

First party data is more crucial than ever.

With less data flowing around the online world, the ability to track people is going to be harder. A lot of users will be lumped into an “audience” so you can go after, say, luxury travelers with a propensity to spend higher ADRs, but you’ll have to go after a group of them rather than an individual like you might have in the past. The best way to find your core audience is to ensure that you’re asking all website and app users if they’ll allow cookies. For those that opt-in, you need to be looking at the data that’s available to you to then reach similar individuals. For instance, if you’re seeing that users who book on your website tend to be a certain gender, age, from a part of the world, or on a certain device…use that information to go out and find more users like that for digital marketing tactics like prospecting display ads. While you could previously use an ad network to access first-party data that was sold to that third-party network, now you must rely on your own data collected on your site and booking engine.

Remarketing tactics are still available, but how you’ll prospect will need to change:

1. Understand
Do thorough research on the topic and better know how the online world your guests are in is changing. The fact you’re reading this is a great start! Know who you’re doing digital marketing with and how they operate today and in the future. A lot of digital agencies rely on using third-party ad networks to run things like display and social media ads. There’s a chance that the network they’re using today could quickly become obsolete once Google makes the switch. The good news is you have about two years before the change begins.

2. Plan Ahead
Set up your tracking. Know your guests. Invest in the digital marketing tactics that will survive the cookie hurricane. Tactics like meta search, SEO, and paid search aren’t entirely touched by the changes of third-party cookies going away. Someone searching for your hotel on Google is still someone searching for your hotel. No cookie or tracking change can take that away from you. 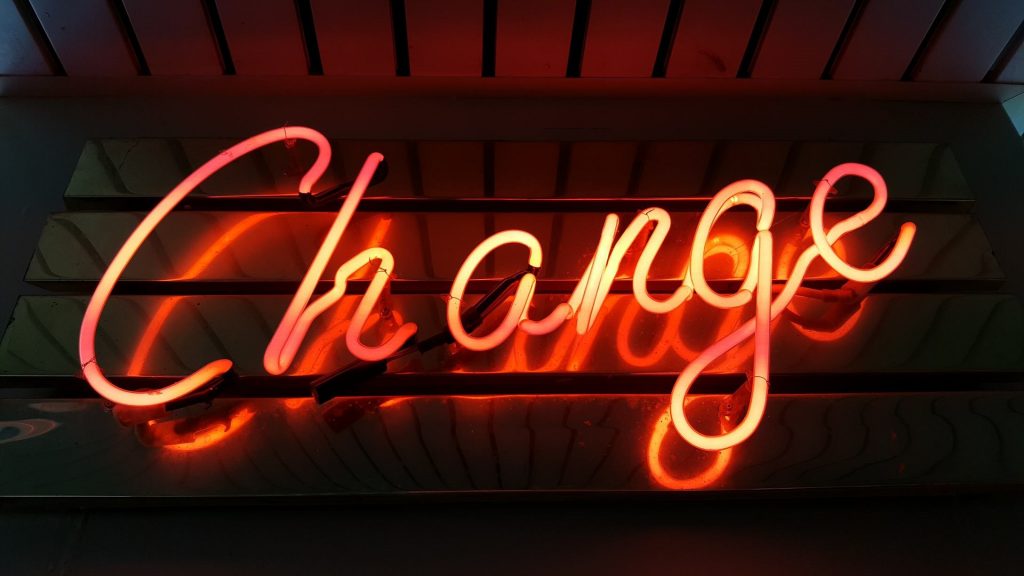 Here at Sabre we continue to monitor the digital landscape and work with our partners, including Google, to support our hospitality clients in their digital media campaigns. If you would like to learn more about using Sabre Hospitality to run your online marketing and advertising campaigns to drive premium bookings to your website, please reach out to your Sabre Account Management representative. 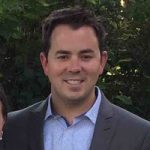